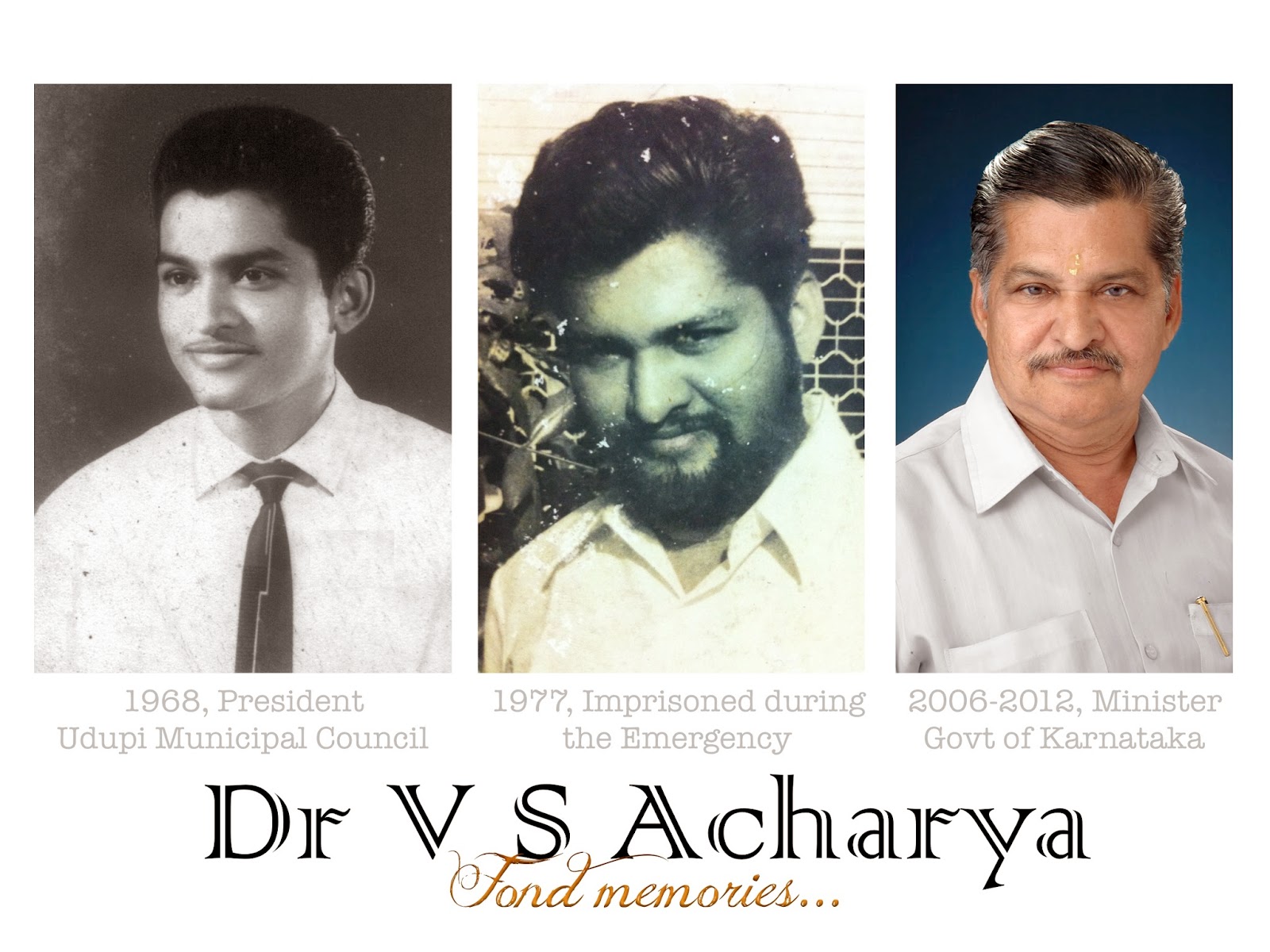 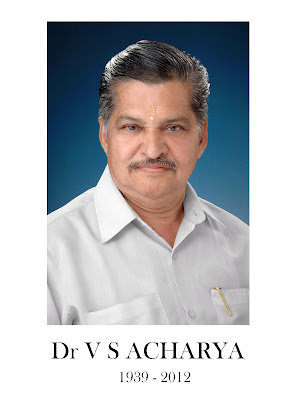 One Photo is worth thousand words... 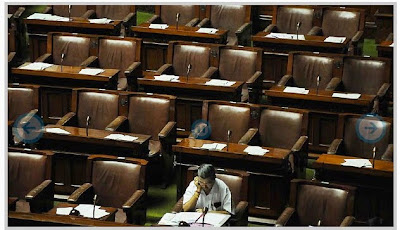 कर्मण्ये वाधिकारस्ते म फलेषु कदाचना
कर्मफलेह्तुर भुरमा ते संगोस्त्वकर्मानी॥
You have a right to perform your prescribed duty, but you are not entitled to the fruits of action। Never consider yourself the cause of the results of your activities, and never be attached to not doing your duty.
Photo Courtesy: Sanjevani
Posted by Dr V S Acharya at 5:51 AM 6 comments: 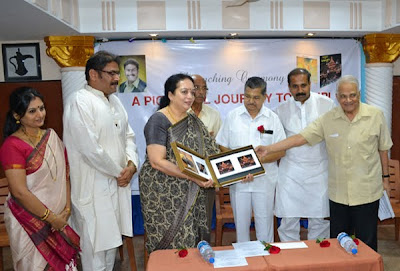 Best memento for a visitor to Udupi!

Speaking on the occasion, managing editor of Taranga Sandhya Pai said that deeply grasping the ancient regions of Udupi, the people, their lifestyle Astro Mohan has presented them beautifully in his book. This would be very useful to the tourists, she opined. Kiran Manjanabailu said that the book throws a light on the famous tourist spots of Udupi, the educational institutions and the religious prominence of the place.

Higher education minister V S Acharya, the chief guest said that Mohan has brought out the book on collection of photographs in an optimal manner and it’s a best gift one can give to loved ones, he added.

Wishing all the success to Astro Mohan MLA Raghupathi Bhat said that the book provides the real meaning of the word ‘Art’. It contains the developmental details of Udupi district too which is very informative, he said.

In his presidential speech Eshwarayya said that photography is a peace of heart. A best photo touches the hearts and minds of the viewers. The creativity too plays a major role. Photographs have a cultural entity, he said.

Laxminarayana Upadhya led the prayers and Janardhana Kodavooru welcomed the gathering and compered the prpgramme. Praveen Mohan proposed the vote of thanks. 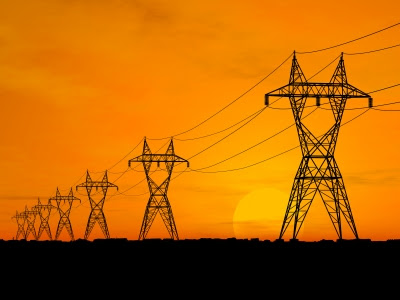 BANGALORE, JAN 13: The Karnataka Government has got the Ministry of Environment and Forests (MoEF) clearance to draw 400 kV line through the Western Ghats to evacuate power generated by Udupi Power Corporation Ltd (UPCL) second unit.

According to the Karnataka Higher Education Minister, Dr V.S. Acharya, “The Government, four days ago, got the necessary clearances from the Union Ministry to take up 400 kV line in Western Ghats. Since it is delayed for a year, we are to commence the work on war footing.”

The 400-crore project is to be executed by KPTCL and we hope to complete it by March this year, he added.

The Government has committed to buy power produced by UPCL at Rs 3.71 for a unit.

SULPHUR CONTENT: “Since UPCL is using coal from Indonesia, it has high sulphur content at 0.86/kg. We have asked the promoters of power plant to install desulphurisation plant to minimise pollution,” said Dr Acharya.

Briefing reporters after the State Cabinet meeting, Dr Acharya said “The Cabinet today has ratified spot power purchase made by KPCL during 2011-12.”

As for power needs during 2012-13, Karnataka is banking on completing of 400 kV line to evacuate power generated by Udupi Power Corporation Ltd (UPCL) and Bellary power's third unit.

“For summer needs, we are to follow KERC's guidelines in power purchase. At present we feel comfortable for the two projects are to yield sufficient power to tide over the period,” said Dr Acharya.
The Hindu BusinessLine/ Anil U
Posted by Dr V S Acharya at 6:12 AM No comments:

No stepping down: news planted in the media by vested interests!

Again, news planters at work. A "reputed" national daily too has shown it's vulnerability to PAID NEWS!
Posted by Dr V S Acharya at 7:54 PM 1 comment:

The veteran BJP leader from Udupi, is someone who has a clear perception of party affairs in Karnataka and does not mind speaking the truth though at times, he gives the impression of being stubborn. In an interview with Deccan Chronicle, Dr Acharya spoke about the crisis in the party, possible solutions and the controversial bill pertaining to the endowment department.

Q: Some leaders including state BJP president K.S. Eshwarappa and Chief Minister D.V. Sadananda Gowda have admitted to problems in the party. According to you, what are the problems? If I am right, the problem is very simple. Party central leaders have told B.S. Yeddyurappa (former chief minister) to come clean in all the cases pending against him. They have told him that he cannot hold any post while facing charges. If he heeds this, everything will be sorted out.

But the situation does not look simple. Mr Yeddyurappa says that he has not demanded any post, nor does he want any. Yet, his supporters keep meeting at his residence to demand his political rehabilitation. Is groupism not affecting the BJP? I do not think so. There is nothing wrong in legislators and a few ministers meeting and demanding a fitting post for Mr Yeddyurappa in the party. All they are doing is expressing their opinion because BSY is a popular leader of the BJP. I feel it will only strengthen the party. Nor do I think their utterances in public will harm the party. Now that they have expressed their views, they should leave the matter to the party leadership and remain silent as disciplined soldiers of the party. Mr Yeddyurappa also seems to have reconciled to the idea that the party leadership will take care of his interests which is why he said he will function as an ordinary worker and not harm the party.

The situation seems so serious that ministers including home minister R. Ashok had to go to New Delhi and meet central leaders. Comment.

Do you know that whenever I go to New Delhi, I will not return without meeting Advaniji? Mr Ashok is the home minister. During his visit to New Delhi, he might have met party leaders. When we meet our national leaders, they are sure to ask us and obtain inputs on the situation in Karnataka. This helps them take decisions if need be, in future.

But, the differences in the party seem to be hitting the state hard. Ministers owing allegiance to Mr Yeddyurappa do not seem interested in attending office and redressing people’s problems. Take the case of public works minister, C.M. Udasi. He has come under severe criticism.

Mr Udasi is a senior minister and works very hard. The status of bad roads need not reflect on his style of functioning. There may be many other factors responsible like the allocation of funds and rules governing clearance of projects. He has to adhere to rules while implementing works. He might have expressed his allegiance to Mr Yeddyurappa because, he was made a Cabinet minister by BSY. That does not mean he has neglected his work. All our ministers are working hard. Some people have created a wrong impression about me too. They said my ill health is affecting my performance. It is unfortunate that the media is not interested in giving the right news.

Moving on to departmental issues, one of the bills of your department was defeated in the Legislative Assembly. Do you plan to bring the bill back in the same form or will you introduce an amended version in the next session?

I will introduce the bill in the Legislative Council and get it passed before presenting it in the Assembly again. I do not know why people think it was I who proposed the bill. The contentious clause which some legislators referred to, was not introduced by me. It was part of the original legislation in which law makers had used a group of words: "temple pertinent to maths". During the court case, the judges scrutinised these words and wanted the government to clarify on it. So the government brought an amendment in the last session. I have not changed the motive of the original legislation which had excluded temples governed by maths from government scrutiny. The contentious clause was part of the legislation for the past 14 years. I am bringing an amendment with a clarification as suggested by the court. 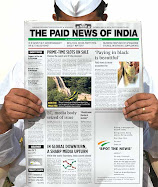 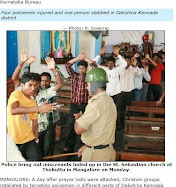